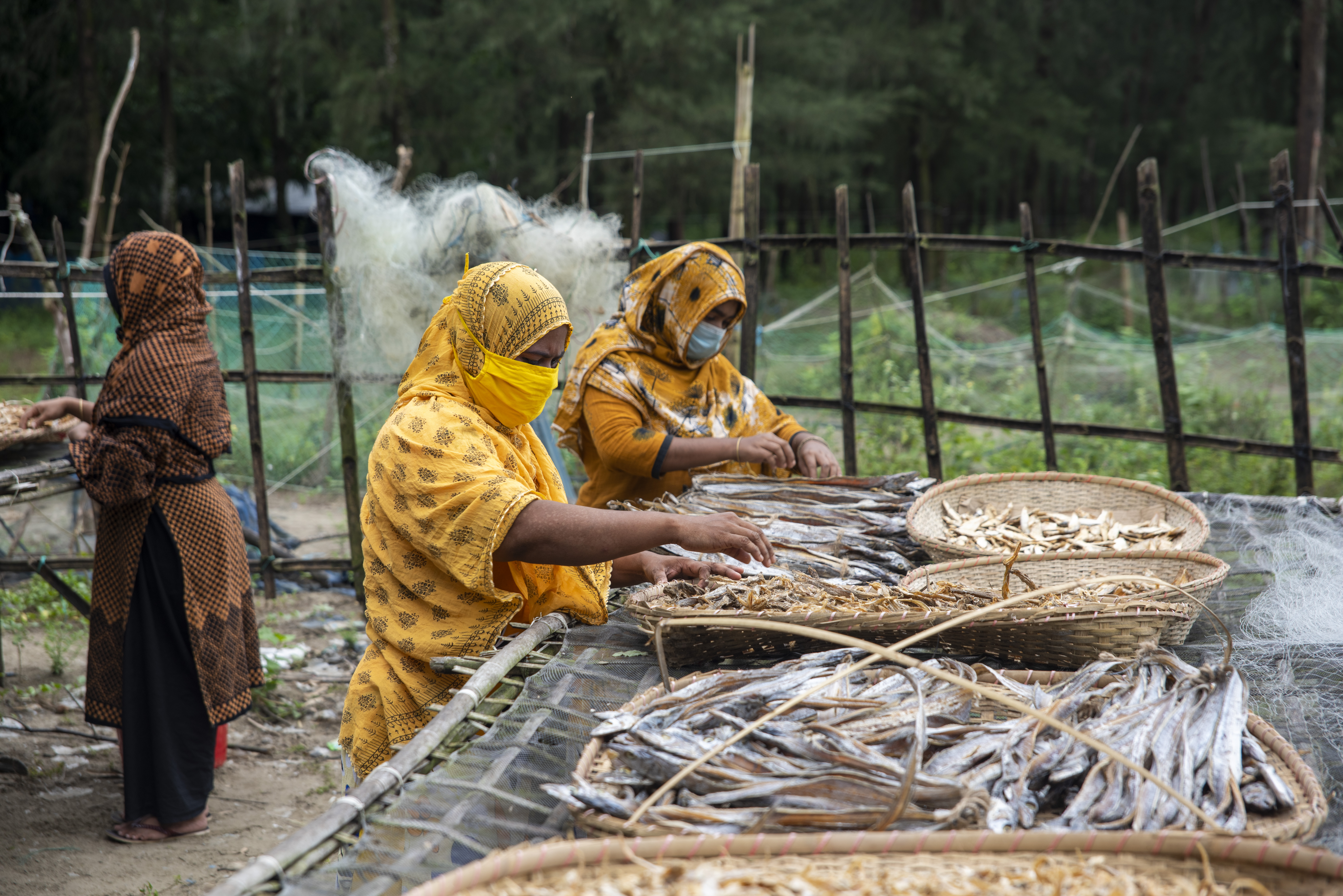 Cox’s Bazar – The COVID-19 pandemic has hit Bangladesh harder than any tropical cyclone. Instead of uprooting trees and hurling powerful tides from an angry sea, what’s been uprooted are entire livelihoods—as well as the families trying to survive in one of the world’s most crowded countries.

Returning migrants and host communities in the southernmost district of Bangladesh are feeling the worst of the onslaught. There, some 700,000 people have lost their source of income, just since the mid-March 2020 COVID-19 outbreak. Almost one year later, most have limited access to jobs. Women are less likely than men to secure any job at all.

Adding to the struggle for jobs are the many migrants forced home as jobs are lost overseas. According to the Ministry of Expatriates’ Welfare and Overseas Employment, over 400,000 migrant workers have returned to Bangladesh since March 2020. The ripple effect is not only heightened competition for work, but also a collapse of a local economy due to inability to pay back loans—including funds borrowed to go abroad for work.

On 24 February 2021, IOM Bangladesh, with support from the IOM Development Fund, launched a 24-month project called “Building Social Cohesion in Host Communities in Cox's Bazar through Skills Development.” It is for returning migrants and vulnerable host communities to use the troubled time to do something crucial, even though it may not pay off for years. That is, to acquire the skills needed to land and keep a job in the future.

“We are committed to working with our partners to build the resilience of returning migrants and foster social cohesion among their communities of return,” explained Patrick Charignon, IOM Cox’s Bazar Transition and Recovery Programme Coordinator. “We are convinced that through this project we can provide unemployed community members the skills needed to build better futures for themselves, their families and their communities.”

The primary driver of migration from Cox’s Bazar district is the lack of employment opportunities. Sadly, the current pandemic is further threatening the welfare of millions of people in the country, where there have been large-scale redundancies of workers, especially in the garment sector. Now, there is wide-spread food insecurity.

According to the Bangladesh Bureau of Statistics, Cox’s Bazar is one of the lowest-performing districts in Bangladesh in terms of education and skills training, with about 33 per cent of the population living below the poverty line.

Through the project, over 200 community members will receive skill development and livelihoods support. To ensure the sustainability of the initiative, the project will encourage the trained beneficiaries to conduct their own training sessions for other community members. This “train the trainers” approach means the beneficiaries will well exceed the relatively few people attending the first training sessions.

This will be achieved through the profiling of skills of selected unemployed community members and returning migrant workers, and the implementation of a series of targeted livelihood diversification training modules based on the findings of the skills profile assessment.

The training modules themselves will be chosen following an assessment, and will depend on the capabilities and interests of the participants. Previous modules here have covered topics such as construction, dry fishing and tailoring—skills that in better times quickly translate into local jobs.

While targeted economic stimulus packages are being discussed for the most vulnerable, IOM has undertaken this new project because of its belief that it is critical to build the resilience of host communities in Cox’s Bazar through skills development. The initiative aims to ease unemployment by equipping beneficiaries with the know-how to develop the skills needed to meet the employment demands of the labour market, as well as investing in self-employment opportunities.

The project will be implemented in close partnership with the Deputy Commissioner’s Office in Cox’s Bazar, the Department of Public Health and Engineering, civil society organizations, host communities and key stakeholders.

“IOM has already been implementing several projects supporting host communities in Cox’s Bazar,” said Cox’s Bazar’s Deputy Commissioner Md Mamunur Rashid, addressing as chief guest during the project launch. “We applaud this new initiative and guarantee the continued support of the District Administration, Upazila and Union for the successful implementation of the project.”